Good news on current trading has caused the Savigny Luxury Index to bounce back this month. 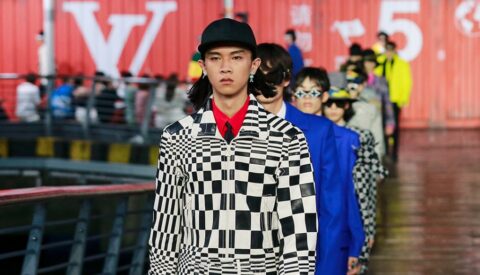 LONDON, United Kingdom — While results announcements continued to underscore the impact of Covid-19 on the first six months of 2020, comments on current trading were upbeat, helping the Savigny Luxury Index recover some lost ground. Tiffany announced that sales during August 2020 were slightly above August last year; Brunello Cucinelli returned to sales growth in the second half of 2020, anticipating an EBITDA margin of around 13 to 14 percent. Estée Lauder’s fourth-quarter sales (to June 2020) decreased by 32 percent, but the beauty group’s sales decline for the full year was only 4 percent. Early recovery in Mainland China as well as a substantial uptick in e-commerce business have been instrumental in kick-starting the recovery of the sector, as evidenced last month.

Fashion shows and trade fairs are making a cautious comeback. Louis Vuitton hosted its Spring/Summer 2021 menswear show (outdoors) in Shanghai to a predominantly local audience of VIPs and journalists, and is planning to take the show on tour to other Asian locations. London Fashion Week in September will consist of a mixture of physical & digital shows. Geneva hosted its first set of “Geneva Watch Days,” a pared-down watch fair with exhibitors spread over a number of the city’s luxury hotels.

The luxury industry is venturing further down the road of sustainability and ethics: Prada announced it will no longer be using kangaroo skin, and Valentino followed with a ban on alpaca wool. Tiffany will expand the scope of traceability of its individually registered diamonds by sharing the full craftsmanship journey, not just the provenance of the raw diamond. Virgil Abloh’s latest menswear collection for Louis Vuitton consisted principally of new looks made using recycled material as well as a selection of looks from previous collections; only 2 out of the 52 looks were made with new materials. Ralph Lauren invested in Natural Fiber Welding, a sustainable material science start-up that has developed a process for upcycling natural fibres such as cotton waste into performance materials.

The Savigny Luxury Index (“SLI”) gained just over 7 percent in August, outperforming the MSCI by 150 basis points, although not enough to close the gap caused by July’s drop. 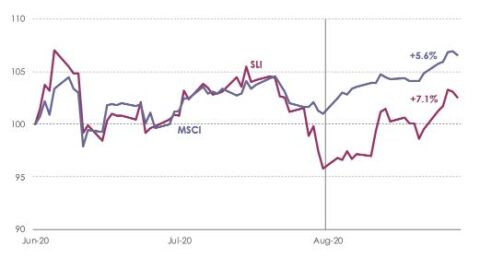 Despite their rhetoric of better days ahead, luxury goods companies are still cautious with their cash. Estée Lauder said it would cut 1,500 to 2,000 jobs globally and close 10 percent to 15 percent of its freestanding stores — partly in response to a significant shift of business from bricks-and-mortar to online, some of which the beauty group believes may stick.

In an effort to retain an extra liquidity buffer, Richemont halved its dividend and is proposing a shareholder loyalty scheme, where it will issue warrants to investors which can be converted into newly created stock at a later date. Corporate activity has also ground to a halt. However, every crisis brings opportunities, and there is plenty of money keen to invest in the sector. We expect deal-making activity to resume in the last quarter of the year.